As already noted in the last post, LireDemo – the Swing based demonstrator of the capabilities of the LIRe library – includes now a mosaic creation option. So what actually is the mosaic? Let’s explain it this way: You have one input image, which should be resented through multiple other images (in the index). The mosaic image tries to look like the input image but replaces segments of the input image with images from the index. The example in above image shows the input image left and the mosaic on the right hand side (click for a larger version). Special thanks got to Lukas Esterle and Manuel Warum, who contributed the mosaic-engine!

So how can one make such an mosaic image: (i) A first step is to select an input image. (ii) Then configure the number of tiles per row and column of the mosaic. (iii) Click “Start” to run the mosaic  engine. (iv) After some processing time, which can be rather long depending on the number of tiles and the size of the input image you will see the result. (v) Save using the button on the bottom right corner.

For visual people I’ve put together a flash tutorial: 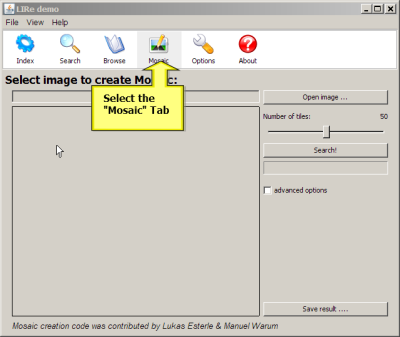