This page features some of the game related projects I wanted to make public. 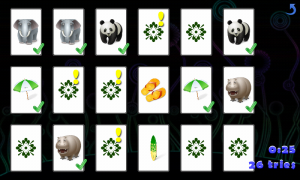 Find pairs. A cute & simple version of the classical, fun game for Android. It’s ad free and — as far as I hope — freed from typical annoyances: Memory is a simple and intuitive game. This app presents a clean and straightforward version of the classical, fun game. Find pairs of cards showing the same image by turning two at a time. You can play with 4, 6, 12 or 18 cards.

Three small Java 1.6 games for kids in a package. Source is included in the package, license is GPL. There is also some i18n for English and German.

GuessWhat: This game displays images (randomly or in sequence) hidden by 6 blocks. With each mouse click (e.g. by touch screen) or pressed key one block vanishes and a part of the image appears. The image sets are configurable. Adding your own image set is easy: Just copy them to a subfolder in the unzipped folder.

Soundmachine: This game features a blue ellipse dangling around on a black screen. Pressing a button increases the twist of the ellipse and results in a rapid change of the background (like a flash).

SoundVis: The main idea is to animate a kid to make sounds by for instance clapping or yelling. The louder the sound the bigger the blue circle in the center gets. While this sounds trivial it is great fun 🙂 Note that the microphone has to be functional. A simple test is included in the start screen of SoundVis.

Download the games (~ 3 MB) along with the source and unzip them. Windows users will find executable files to start the games. Note that Java 1.6 has to be installed. Linux users will be able to run the games using the commands given in the batch files.