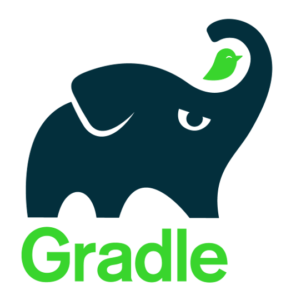 In the process of updating to Lucene version 6.3.0 we switched the main build system to Gradle. The source code is now better organized, following the structure of Maven with all the source divided into main and test, and the resources being separated. It allows for the use of Maven repositories, automates most tasks out-of-the-box and is extended easily using the Groovy programming language.

Gradle also comes with a wrapper, so as long Java is installed, the build process is fully automated and does not need additional software installed.

Moreover, build.gradle files can be easily used to import projects into JetBrains IDEA. LireDemo and SimpleApplication are sub projects with their own build.gradle files. Checkout the new structure at https://github.com/dermotte/lire. 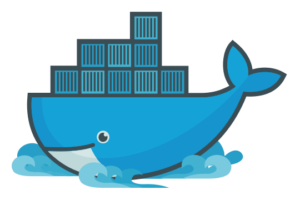 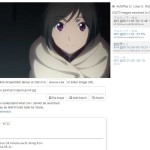 I do not often hear of application built with LIRE, however if I do I really appreciate it. The use case of What Anime is this? is exceptional in many ways. First of all LIRE was very well applied and can really solve a problem there, and second, Soruly Ho tuned it to search through over 360 million images on a single server with incredibly reasonable response time.

The web page built by Soruly Ho provides a search interface to (re-)find frames in Anime videos. Not being into Anime myself I still know it’s a hand drawn or computer animation and it’s hugely popular among fans … and there are a lot of them.

Soruly Ho was so nice to compile background information on his project:

Thanks to the LIRE Solr Integration Project, I was able to develop the first prototype just 12 hours after I met LIRE, without touching a line of the source code! After setting up the web server and Solr, I just have to write a few scripts to put all the pieces together. To analyze the video, I use ffmpeg to extract each frame as a jpg file with the timecode as the file name. Then, the ParallelSolrIndexer analyze all these images and generate an XML file. Before loading this XML into Solr, I use a Python script to put the video path and timecode to the title field. Finally, I write a few lines of Javascript to use Solr REST API to submit the image URL to the LireRequestHandler. After some magic, it would return a list of matching images sorted by similarity, with the original video path and timecode in the title field. The idea is pretty simple. Every developer can build this.

But scaling is challenging. There are over 15,000 hours of video indexed in my search engine. Assume they are all 24 fps, there would be 1.3 billion frames in total. This is too big to fit in my server (which is just a high-end PC). Video always play forward in time, so I use a running window to remove duplicate frames. Unlike real life video, most anime are actually drawn in 12 fps or less, this method significantly reduces number of frames by 70%. Out of many feature classes supported by LIRE, I only use the Color Layout Descriptor and drop others to save space, memory and computation time for analysis. Now, each analyzed frame in my Solr index only occupies 197 Bytes. Still, solely relying on one image descriptor already achieves very high accuracy. Even after such optimization, the remaining 366 million frames are still too much that the query would often timeout. So I studied and modified a little bit of the LireRequestHandler. (It is great that LIRE is free and open source!) Instead of using the performance-killing BooleanClause.Occur.SHOULD, I search the hashes with BooleanClause.Occur.MUST one by one until a good match is found. I am only interested to images with similarity > 90%, i.e. there is at least one common hash if I select 10 out of 100 hash values at random. The search would complete in at most 10 iterations, otherwise, I assume there is no match. But random is not good because results are inconsistent, thus, cannot be cached. So I ran an analysis on the hash distribution, and always start searching from the least populated hash. So, similarity calculation is performed on a smaller set of images. The Color Layout Descriptor does not produce an evenly distributed hash on anime. Least populated hash matches only a few frames while most populated hash matches over 277 million frames. The last performance issue is keeping a 67.5GB index with just 32GB RAM, which I think can be solved with just more RAM.

The actual source I have modified and my hash distribution table, can be found on Github.

You can try What Anime is this? yourself at https://whatanime.ga/. Thanks to Soruly Ho for sharing his thoughts and building this great search engine!

Today, the first official beta version of LIRE 1.0 has been released. After loads of internal tests we decided to pin it down to quasi-stable. There are loads of new features compared to 0.9.5 including metric spaces indexing, DocValues based searching, the SIMPLE approach for localizing global descriptors, new global ones, like CENTRIST, a lot of performance tweaks, and so on.

For those of you using the nightly build or the repository version not much changed, everyone else might check out the new APIs and possibilities staring from the SimpleApplication collection moving over to the LIRE documentation.

You will find the pre-compiled binaries on the download page, hosted by ITEC / Klagenfurt University.

I’ve just uploaded LIRE 0.9.4 beta to the Google Code downloads page. This is an intermediate release that reflects several changes within the SVN trunk. Basically I put it online as there are many, many bugs solved in this one and it’s performing much, much faster than the 0.9.3 release. If you want to get the latest version I’d recommend to stick to the SVN. However, currently I’m changing a lot of feature serialization methods, so there’s no guarantee that an index created with 0.9.4 beta will work out with any newer version. Note also that the release does not work with older indexes 😉

While I know that the performance did not skyrocket with Lucene 4.0 I finally came around to find out why. Unfortunately the field compression technique applied in Lucene 4.x compresses each and every stored field … and decompresses it upon access. This makes up for a nice overhead when reading the index in a linear way, which is excactly one of the main methods of LIRE. 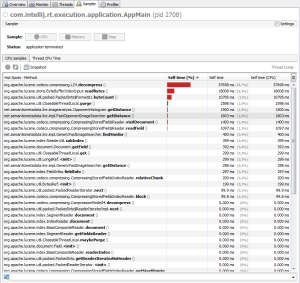 The image shows a screen shot of the CPU sampler in VisualVM. 58.7% of the CPU time go to the LZ4 decompression routine. That’s quite a lot and makes a huge difference for search. If anyone has a workaround of sort, I’d be happy 🙂

Update (2021-07-03): With the great help of the people from the lucene-user list I found at least a speed-up. In the current SVN version, there is a nove LireCustomCodec for stored fields, which speeds up decompression a lot. Moreover there is now an in-memory caching approach implemented in the GeneriecFastImageSearcher class, which is turned off by default, but speeds up search time (as a trade off for memory and init time) by holding image features in-memory. It has been tested with up to 1.5M images.

The current LireDemo 0.9.4 beta release features a new indexing routine, which is much faster than the old one. It’s based on the producer-consumer principle and makes — hopefully — optimal use of I/O and up to 8 cores of a system. Moreover, the new PHOG feature implementation is included and you can give it a try. Furthermore JCD, FCTH and CEDD got a more compact representation of their descriptors and use much less storage space now. Several small changes include parameter tuning on several descriptors and so on. All the changes have been documented in the CHANGES.txt file in the SVN.

In the current SVN version three global features have been re-visited in terms of serialization. This was necessary as the index of the web demo with 300k images already exceed 1.5 GB.

This significant reduction in space leads to (i) smaller indexes, (ii) reduced I/O time, and (iii) therefore, to faster search.

How was this done? Basically it’s clever organization of bytes. In the case of JCD the histogram has 168 entries, each in [0,127], so basically half a byte.Therefore, you can stuff 2 of these values into one byte, but you have to take care of the fact, that Java only supports bit-wise operations on ints and bytes are signed. So the trick is to create an integer in [0, 2^8-1] and then subtract 128 to get it into byte range. The inverse is done for reading. The rest is common bit shifting.

The code can be seen either in the JCD.java file in the SVN, or in the snippet at pastebin.com for your convenience.